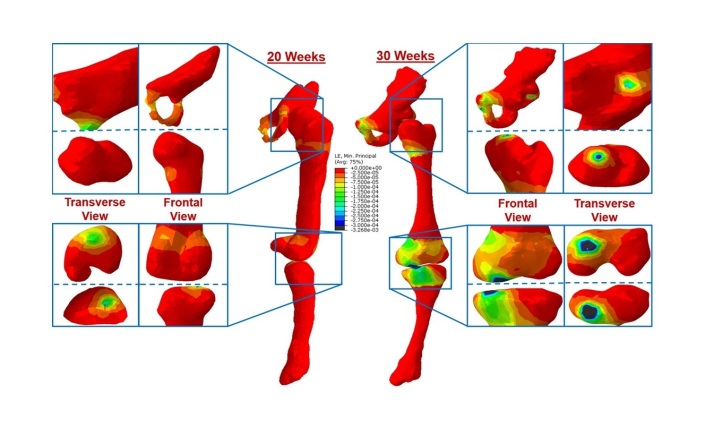 A study of how stress and strain in the fetal skeleton change over gestation, published in the Journal of the Royal Society Interface in 2018 and available here.

Mechanical forces generated by fetal kicks andmovements result in stimulation of the fetal skeleton in the form of stress and strain. This stimulation is known to be critical for prenatal musculoskeletal development; indeed, abnormal or absent movements have been implicated in multiple congenital disorders. However, the mechanical stress and strain experienced by the developing human skeleton in utero have never before been characterized. Here, we quantify the biomechanics of fetal movements during the second half of gestation by modelling fetal movements captured using novel cine-magnetic resonance imaging technology. By tracking these movements, quantifying fetal kick and muscle forces, and applying them to three-dimensional geometries of the fetal skeleton,we test the hypothesis that stress and strain change over ontogeny. We find that fetal kick force increases significantly from 20 to 30 weeks’ gestation, before decreasing towards term. However, stress and strain in the fetal skeleton rises significantly over the latter half of gestation. This increasing trend with gestational age is important because changes in fetal movement patterns in late pregnancy have been linked to poor fetal outcomes and musculoskeletal malformations. This research represents the first quantification of kick force and mechanical stress and strain due to fetal movements in the human skeleton in utero, thus advancing our understanding of the biomechanical environment of the uterus. Further, by revealing a potential link between fetal biomechanics and skeletal malformations, our work will stimulate future research in tissue engineering and mechanobiology.